ONE NIGHT ONLY Comedy & Variety Festival

The ONE NIGHT ONLY Comedy & Variety Festival is coming to town! Catch the traveling comedy show featuring Nationally & Internationally touring Stand-Ups, Variety Performers, and Beyond as it makes its way around the country.

Keith Nelson: Born in Massachussetts and raised in North Carolina, he played Tuba in marching band, achieved Eagle in Boy Scouts, taught archery, and toured with the Grateful Dead. In 1988 Nelson enrolled at Hampshire College, Amherst, MA, where he studied social undecurrents and alternative politics, and luckily learned to eat fire and juggle. In 1992 he graduated and moved to New York City to work with Autonomedia, a Brooklyn-based small press. In 1994 he became the in-house fire eater at the Blue Angeel Cabaret, and so began a career as a performer. That year he met Stephanie Monseu, taught her to eat fire and juggle, and thus began the Bindlestiff Family Cirkus. Nelson has swallowed swords at Avery Fischer Hall, spun guns at the Walter Reade, made balloon sculptures at the Apollo, and toured with the World of Wonders, one of the last sideshows on the carnival circuit.Stephanie Monseu is co-founder of the Bindlestiff Family Cirkus. She is a mulit-talented New York native. When two unrelated accidents left her with two broken arms in 1994, she put her jewelry business on hold and began performing with Keith Nelson as a fire eater— beginning a lifelong partnership and a commitment to circus and variety arts that has blossomed into a full time career as  performer, booking agent, manager, production designer, director, and creative partner with Nelson. One of the greatest rewards has been working with the amazing and talented artists in the variety community.Nick DiSanto is a musician and sculptor from Lancaster, Pennsylvania. Traveling the American Northeast with his guitar and a multifunctional contrivance known as the DiSantomophone, Nick performs his one-man show wherever audiences might gather. Nick’s enthusiasm for designing, building, and playing his musical contraptions is boundless, as is his love for the ageless American music that comprises his repertoire.Mark Hayward is a World Yo-yo Champion, a member of a World Champion Juggling Team, and a Spintop Champion. His mom is proud. Mark has traveled the world with a yo-yo on his finger (well, mostly in his pocket), and has made appearances on The Late Show with David Letterman twice, America’s Got Talent, and the NBC Nightly News (without committing a crime). Someday Mark hopes to perform for both the President and the Queen. Not being a convicted criminal should help with that.Jonathan Burns always thought he was special. He was the kind of kid who would put his leg over his head at the family reunion or perform musical armpit farts to impress the girls. In 2004, contorting his body and impressing people with his unusual talents became his full-time job. Since then he has performed at over 300 colleges & universities, at festivals and theaters in 9 countries, and was recently featured on the Jay Leno Show & the Late Show with David Letterman. When he’s not performing he can usually be found in an airport terminal or spending time with his lovely wife & daughter (I guess the armpit farts worked!).

Chip Chantry is a Philadelphia-based comedian and writer. He was named 2015’s “Best Stand Up Comedian” in the annual Philadelphia Comedy Awards. He also won 2013’s Philly’s Phunniest Contest at Helium Comedy Club, where he is a regular performer. Chip tours nationally, opening for acts such as Dave Chappelle, Bob Saget and Todd Glass.
In 2012, Chip was a national finalist for Twitter’s annual Shorty Awards in the “Best Emerging Comic” category. His twitter account was also named “funniest in Philadelphia” by the Philadelphia Inquirer in 2013. His comedy album, “Across From the Adonis” was released in 2012.
18 and up to enter.  VALID ID required. 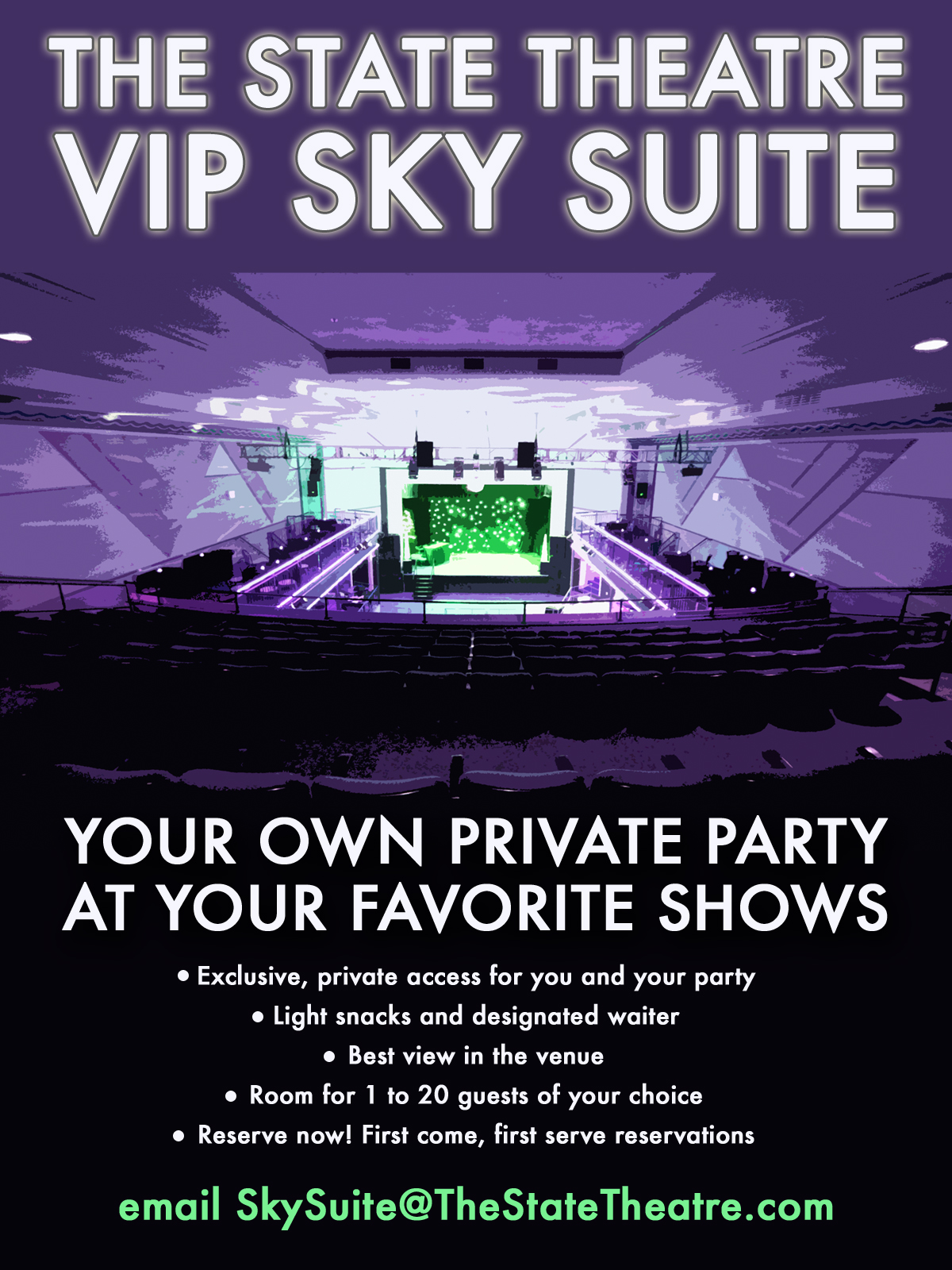 Important Message From The State Theatre

OUR OUTDOOR SPACE IS OPEN FOR DINING AND FREE CONCERTS!
Check out our menu here and visit our events page for upcoming shows

All outdoor events are offered free of charge. If you're able, please consider a donation to help keep us up and running and the music going! Scan or click the QR code below. Donations are run through PayPal